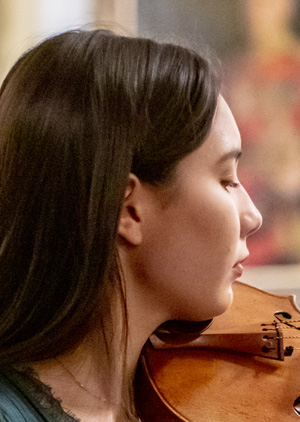 Violist and Violinist Ami-Louise Johnsson was born in Stockholm 2001. She began her violin studies at the age of 5 with Nina and Oleg Balabine and later Hugo Ticciati at the Lilla Akademie music institution in Stockholm. In 2009 she made her solo debut performing J.S.Bach’s Violin Concerto in A-minor with the Swedish Radio Symphony Orchestra in Berwaldhallen. She regularly plays with O/modernt Chamber Orchestra, lead by London based violinist Hugo Ticciati, whom she also studied with in Stockholm. As Ami began her violin studies at the Guildhall School of Music and Drama 2019 together with Prof. D.Takeno, she also began playing the viola, 2020. Ami currently pursues studies with famed pedagogue David Takeno at the Guildhall School. Ami-Louise has played with highly esteemed musicians such as Alasdair Beatson, Staffan Scheja, Henrik Måwe, Priya Mitchell and Marianna Shirinyan. She has participated in masterclasses with members of the Endellion quartet, The Gould Trio, Malin Broman, Simon Crawford-Phillips, Priya Mitchell, Vicky Powell, Natacha Kudritskaya, Tatjana Masurenko, Nobuko Imai, Lawrence Power and Wenting Kang. Ami received multiple awards in Stockholm international music competition 2015 and Rovere D`oro, Italy 2015. She won several chamber music competitions in Sweden and around the Baltic countries as well as scholarships from The Royal Swedish Academy of Music. Ami holds a scholarship from the Anglo-Swedish Society for the third year running.She is a founding member of the Fibonacci String Quartet, formed in 2019. Since their formation they have participated in masterclasses and projects with Adrian Brendel, the Gould Piano Trio, Endellion, Bozzini and Chilingirian Quartets. In March 2020 they won both 1st prize and audience prize at the Beethoven Competition for Young Musicians in London. Later that same month they also won the 1st prize at the Saint James Chamber Music competition. Ami had the privilege of becoming one of the “Talent Unlimited” artists in the UK in July 2020. Ami is playing on a violin by Peter Westerlund, generously loaned to her by Welin Foundation, Stockholm.   "Although the unprecedented times of covid, the year of 2020-2021 turned out positive in lots of ways. To always have something to look forward to, I signed up for online masterclasses and courses and managed to meet artists and musicians trough internet platforms. As I told you in our previous mails, I entered the Max and Peggy Viola competition at the guildhall in November as the youngest contestant and managed to receive this award! This was the beginning of plenty of great news. The recital at St. James's Church in December (That I received from winning the Viola competition) was magical. I really enjoyed it and hope that it will be safe for you to come next time! I was very happy to have been awarded a junior award from the prestigious Hattori Foundation in London, as well as being invited to festivals in Norway, Italy, Germany, UK and Sweden. Thanks to this, my summer is now fully booked! Crossed fingers for no cancellations… The most recent award I received was from the culture department of Solna, (my hometown of Stockholm) named Krausstipendiet. It was a heart-warming gesture to experience such support from the jury from the Royal Swedish Opera, but also from the council of my hometown. The most beautiful and moving point about this year, was the determined mindset of not letting the world situation stop musicians from sharing the music we all love. There is nothing that will ever be able to replace real audiences and their interaction, so now we all know, more than ever, how important and high valued the cultural life have to be. Thank you for your support and trust in me. Without the Anglo-Swedish Society, I wouldn’t have been where I am now, and for that, I am truly thankful. I hope I can play for you in person as soon as the world situation clears up a little bit more. " Ami-Louise Johnsson 7 May 2021   Most recently Ami-Louise was awarded 2nd prize as well as the A.Dvorak Society award for best interpretation of O.Nedbal’s Romantic piece at the 2021 Oskar Nedbal International Viola Competition. Ami is the 2021 laureate of the Kraus Scholarship, awarded to a young musician of great talent in representation of the city of Stockholm in the field of classical music. That same year she was named a 2021-2022 scholar of the Drake Calleja Trust in London. In October, Ami was invited to join the unique ensemble LGT Young soloist, led by Alexander Gilman, for a tour through Switzerland where she performed Telemann Viola Concerto.