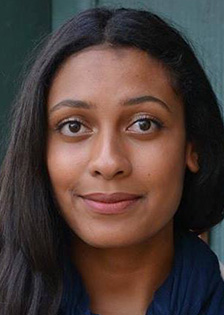 Mezzo-soprano Amie Foon from Sweden is currently studying at The Guildhall School of Music and Drama, under the tutelage of Susan Waters. She is now in her third year of her bachelor studies and generously supported by the school through The Anglo-Swedish Society.

Amie Foon discovered her love for classical music as a 16-year old when she started to take cello lessons, she then changed pathway from jazz singing to classical singing. Before starting her studies in London she studied chamber music as a singer and cellist at Kävesta folkhögskola and then singing at the interpretation of art songs at Vadstena folkhögskola. She has participated in masterclasses with Anne Sofie von O\er, prof. Dorothy Irving, Torbjörn Lillieqvist and Olle Persson.

At Guildhall she has had the opportunity to study with many fine singers and coaches such as Sarah Walker, Richard Jackson and Richard Goulding and recently she was given the opportunity to participate as a chorister in the Opera Department’s world premier of Julian Philip’s opera The Tale of Januarie. Apart from performing art songs which is Amie’s true passion she also sings oratorio and opera, in 2015 she sung the alto solo in Vivaldi’s Gloria with the orchestra opera da camera di Venezia in Vadstena, Sweden and in 2016 she performed the main role; Beatrice in Vadstenas folkhögskola’s production of Lo sposo senza moglie by Domenico Cimarosa.