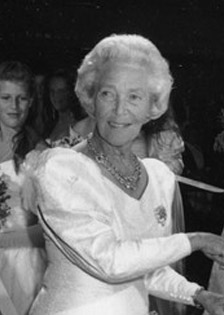 Chairman from 1982 until 1992. President from 1992 until 1999.
Elected President of the Liberal Party 1970. Created Baroness Robson of Kiddington in 1974. In 1982, she succeeded her late husband as Chairman of both the National Liberal Club and the Anglo-Swedish Society. Stood down as a magistrate in 1989, by which time she was the longest-serving magistrate in the country.