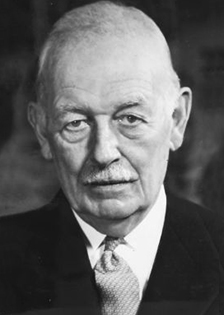 (born 1893, died 1973)
Chairman from around 1929 until around 1938. President from around 1945 until around 1965.
He reached the rank of Major-General during World War II, and played an important role in coordinating the logistics of Operation Overlord. As Chairman, and later President, of the Anglo-Swedish Society, he was made Knight Commander of the Swedish Order of Vasa and much later received the Grand Cross of the Northern Star. He also became Chairman of the L.M Ericsson Telephone Company.