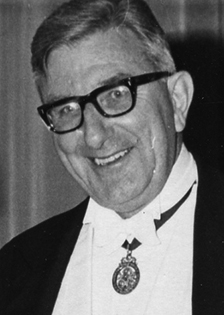 (born 1901, died 1988)
Chairmanfrom around 1960 until about 1968.
Sir Frank Chalton Francis was an English academic librarian and curator. He Served as Director of the British Museum from 1959 to 1969. Francis was appointed CB in 1958 and KCB in 1960. He received honorary appointments from overseas bodies including the Institut de France, Bibliographical Society of America, Kungliga Gustav Adolfs Akademien, American Academy of Arts and Sciences, and the Pierpont Morgan Library, New York.