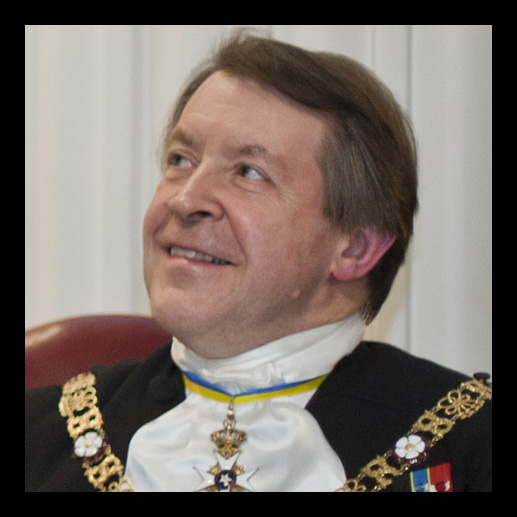 Sir Roger Gifford (1955-2021) was born in Scotland, educated in England and became a firm friend of Sweden from the time he joined Enskilda Securities in 1982, throughout his time as UK head of SEB 2000-2017 and until his death on 25 May. When he took office as the 685th Lord Mayor of London 9 November 2012, the occasion was marked by the traditional Lord Mayor’s Show, a 5km carnival-like procession watched by half a million people on the streets and millions more via television across the world. The Anglo-Swedish Society was in charge of Sweden’s entry, which centred on a large block of glacial ice from Jukkasjärvi. Sir Roger and Lady Gifford generously hosted an Anglo-Swedish Society ball at the Mansion House in October 2013. The Lord Mayor's butler kindly agreed to move out of his flat above the ballroom for a good night's sleep while members and distinguished guests danced until the small hours. In June 2015, Sir Roger acted as Lord Mayor Locum at the gala opening of the 3-day International 2015 Carl Bernhard Wadstrom Conference on Human Rights and the Abolition of Slavery. While Lord Mayor, he carried the Mourning Sword at the funeral of Margaret Thatcher, leading the Queen and Prince Philip in and out of St Paul's Cathedral for the ceremony. Roger was made a Commander of the Order of the Polar Star in 2007 for Swedish culture and Knight Bachelor for services to international business, culture and the City of London.